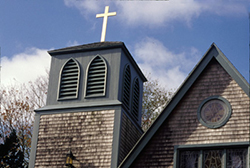 In honor of Black History Month, why not take some time to secure a Martha's Vineyard car rental and visit the area’s African American heritage sites? There are plenty of sites to visit and our island rental cars can help you see them on your own. Here’s how:

A while back, the good residents of Martha’s Vineyard gathered information and established what’s known as the African American Heritage Trail. It spans seven different towns and includes approximately 15 sites. One of the historic sites on the list is Pulpit Rock. Located in Oaks Bluff, its significance is tied to John Saunders. He was an African American Reverend that introduced Methodism to Martha’s Vineyard residents. He preached during the late 1700s and was said to have died for his faith.

The Chappaquiddick Graveyard is another historic spot that is accessible with our Martha’s Vineyard car rentals. Located near Edgartown Harbor, it is one of several graveyards on the tour. What makes this one important is that it is the final resting place of a famous maritime Captain and his wife. His name was William A. Martin. Martin was an Edgartown native who went on to become the island’s first and sole Whaling Captain of African American descent. He and his wife died in the early 1900s.

This brings us to the other graveyard on the heritage trail. Considered to be the final resting place of another Martin family member, it’s called Old Eastville. It is also interesting to note that at one time, a Marine Hospital was said to have been located there. Thus, many of the other people interred there are believed to be connected to the island’s maritime history. You can find the site in Oak Bluffs near Lagoon Pond and the Massachusetts Lobster Hatchery.

We have A-A Island Auto Rental locations situated near various stops along the African American Heritage Trail of Martha’s Vineyard. So to book your Martha’s Vineyard car rental and see the historic sites for yourself, please contact us at (800) 627-6333.